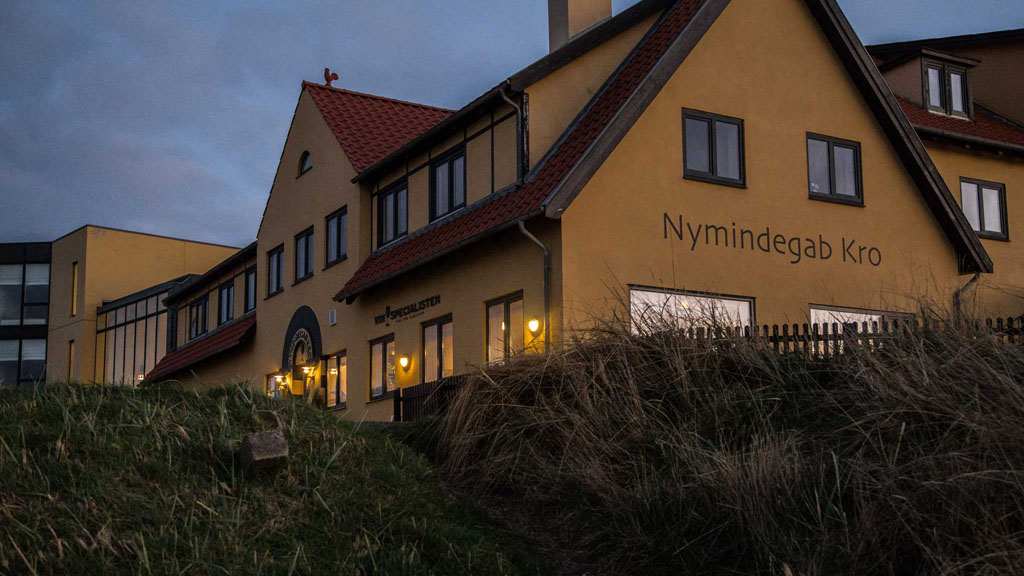 The inn has a long tradition as a roadside inn. We have been innkeepers since January 2000, and since then we have been rebuilding and adding parts to offer our guests a modern environment and excellent food. The inn has a beautiful view of the dunes and the sea, and this makes Nymindegab Kro a very special place.

The history of the inn.
In 1862, Jes Christensen took over Nymindegab Kro. At that time, the inn was a large quadrangle-style farm, and the farming was an important part of the inn’s economy. The inn contained a large front room, stables, a taproom and a smaller room. The large front room was panelled with space for paintings by the many artists staying at the inn.

At the turn of the century, a new building was added to the inn, and several changes were made. The guest rooms were in the west wing ? on the first floor above the cow stables ? and the guests complained about the smells and noises from the stable. The cow stable and the scullery were thus instead turned into kitchen, pantry and rooms for the staff. A new wing was built to the south. In this wing, there was a hall as well as a corridor with rather primitive and unheated guest rooms.

The inn was known all over the country as a cosy place with good food, but the conditions were rather primitive. In 1936, a fire started in the barn, and the inn burned down. Many of the valuable paintings were lost.

The new inn was built a year later, a little further to the west. Unfortunately, the building burned down already in 1943, during the German occupation. However, the kitchen in the basement was intact enough to use, and there was much activity in the area around Nymindegab with building of bunkers etc. Thus a temporary barracks was built near the inn to serve the many workers.

During recent years, the inn has been renovated and redecorated with modern rooms and facilities for conferences and holidays. Nymindegab Kro is still a nice place where good meals are served. In 2001, a new wing with guest rooms was built.

The guests at the inn
Many painters have visited Nymindegab Kro. Just like Skagen, the area has impressive nature and changing light, which offers good possibilities for painters.

Laur. Tuxen, later a profession, came to Nymindegab the first time in 1870 and used to boast that he was the first painter to discover Nymindegab. The painter Erik Henningsen, the artist behind the well-known “Tuborg-painting”, was a yearly guest for a while.

The bird painter Johs. Larsen was attracted by the birdlife and frequently used his sketch pad at Nymindegab. Marie Thymann had a special part of the inn set aside with an atelier, because she was one of the more frequent guests. Erik Henningsen painted a picture of her in her cart, and it is still exhibited at the inn.

Other artists have also visited Nymindegab Kro. It is rumoured that Carl Nielsen composed part of the music for his opera “Maskarade” at Nymindegab, as well as part of a symphony. The writer Svend Fleuron, who wrote about animals, lived at the inn and researched for his books. Erik Eriksen, the author of “Den Tavse Dansker” (The quiet Dane) wrote a book about Nymindegab “Fjordby Badehotel”. Holger Drachmann visited the inn one year.

Although part of the many paintings were lost in the fire of 1936, there are still memories of the time where artists holidayed at Nymindegab.